Time moves and bends in Yogya. One day becomes two, two days become four. Each day we head down to Jalan Maliobro for breakfast and then take becaks out in a new direction. On the first day we shop and eat. For dinner we choose a noisy cafe with ‘enak, lezmat, nikmat, sedap’ painted in curly script all around the cornices. We sing the words in thanks to the waiters for the delicious feast and roll home full and happy.

The next day we watch as plain cloth transforms into works of art. We sit by the batik artists on low stools as they draw intricate patterns from wax-filled pipes. A stooping old man collects the sticky cloths and drops them into deep vats of deep brown or woad blue dye.

The dark fluid bubbles away until the dyer hooks up the dripping material and drapes them over bamboo poles to dry, ready for the next layer of pattern to be drawn.

On day three we take a long ride to the silversmith studios on the outskirts of the city. The smiths draw strands of silver into fine filigree threads to create miniature becaks and boats, butterflies and birds, brooches and bracelets. In the centre of the studio is a great work of silver mounded up in layers like a birthday cake.

“What is that Dad?” asks Matt squaring his face against the glass case.

“That,” says Dad,”is Borobudur where The Buddha lives and that’s where we are going tomorrow.”
So day four starts very early with the arrival of a smiling Pak Ade. His crisp white shirt, neat sarong and smooth dark hair beneath a bright Javanese blangkon contrast with the faded ‘Borobudur Tours’ expedition bus. But after much care in checking of bags and counting of heads Pak Ade gently steers his cargo through the still streets to the edge of the city, past ornate houses and out into winding lanes. Village shacks with tumbling gardens and crowing roosters soon give way to open land where resolute farmers and their buffalo start their day’s work. To the west the sky is lit pale yellow by a waking sun but to the east the horizon is a strange pearly grey.  Only slowly do we see the tapering shoulders of the volcano which rises like a dark and brooding giant from the silvery fields.

“Is that going to erupt Dad?” Matt spots the whisper of steam from the crown of the mountain.
“That’s Gunung Merapi Matt and I don’t think it’s going to erupt – not today anyway,” Dad reassures him. But as we turn away from the mountain Matt moves nimbly to the back of the bus and stares intently in the hope of seeing s

Pak Ade loses his smile briefly and shakes his head. “Gunung itu terkadang sangat marah,” he mutters as if we must not foolishly say anything to awake the mountain.

We travel deeper into the heart of Java, slicing through the ancient volcanic basin that spreads to the sea from the great ring of mountains to the north. After miles of steering away from the rising sun with Pak Ade’s keen eye alert to ducks crossing the road and bikes tottering toward us loaded with produce, we turn onto a narrow lane heading to the foot of the mountains. Just as Johnny and Bart start to pull at mum to appease their hunger we reach a small village and Pak Ade brings the bus to a bumpy but timely stop at a warung.

“Silakan makan!” he calls as we squeeze out of the bus. The warung props by a bridge which stretches above a broad river and carries the road into a deep forest on the far bank. By now the sun 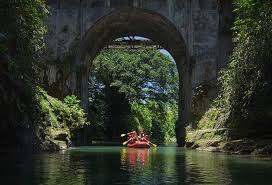 sits at her mid-morning rest and the air grows warm and sticky. We relish a late breakfast of oily noodles and sweet tea around the warung, happily swinging our legs from the high stools. Far below us water spills noisily over rocks and cool columns of mist drift up from the river below, enticing us to be on the move again.

Pak Ade finishes his smoke and springs purposefully from his stool. “Candi Mendut!” he announces with great ceremony, removing his blangcon in a show of respect and gesturing toward a small dense clump of forest on our side of the river.

We make a small procession, stepping through the great aerial roots of the banyan trees and stands of towering bamboo until we reach an uneven pavement of stones. Deep calls of monkeys and birds fill the air around us as if heralding our arrival at the tall grey-green temple hidden within the trees. Tony and Matt leap up the steep steps towards the slit in the stones and Johnny clambers up behind them. We step through into a dark chamber of dank stale air where the silence is broken only by soft drips of water.

“Look up Matt,” I can just make out the steep ceiling rising to a point like the inside of an ice-cream cone far above us.

In the cold blackness we sense the presence of three huge figures looming toward us out of the darkness. Dad lifts Johnny up to see the great statues. “Look Dad giants, three giants.”

Pak Ade gives us a lesson on the true temple dwellers. The smooth central figure of The Buddha sits with his ever watchful companions – the teachers of compassion and power.

“This one looks down on us and listens to our sorrows and this one keeps the truth and has all the power of all the Buddhas.”

Even Matt holds still in the presence of these great beings while Johnny is eager to get even closer and at least sit up on the Buddha’s lap. Dad plucks him up to avoid offending The Buddha and takes him outside to see the animals carved into stories around the temple.

The shallow dark space of the temple soon crowds in on us and we step out into the warm air. I wander reluctantly back in the direction of the warung, gazing up into the deep green of the forest canopy and emerge in a dream-like state into the shock of bright sunlight.

Time restarts as Pak Ade turns over the motor and the bus slowly judders across the bridge into the depth of the forest. We only travel for about a mile or two when we clear the trees and come onto an open hillside where Pak Ade stops to speak to an official looking man. He waves us onto another track and we head off on an up and down journey over rough grass and rutted dirt.  A small group of workmen are bent over a mound of stones which marks the end of the track and Pak Ade brings as all to a stop with a great sigh.

We take our bearings and gather up our bags to trek off up the slope ahead. But at the top of the brow we stop in wonder. For the silver cake in the glass cabinet now rises ahead of us, mounded up in stone upon stone as a huge monument which spreads across the hillside.

“Yes it is Johnny – this is Borobudur.”

The site at Borobudur before the full restoration which started in 1973, the year of our visit.

From there we make an untidy pilgrimage up and up toward the great temple, following the threads of tracks which the workmen use to ferry stones down from the monument to a series of covered shelters. Apart from the stone bearers and a few white shirted officials who all look sapped by heat, we seem to be the only living souls here. Stones lie everywhere in the grass and the whole structure seems to tilt and bend.

At the base of the monument Dad and Pak Ade stop again to talk with a tall Dutchman who is there to help with the temple restoration project.

Mum sets out some blankets under a tree among the stones and sits Bart up like a little reincarnation of The Buddha. A workman stops to look at this rare sight and calls his friends so that there is soon a clutch of people paying no heed to the work of the temple but holding court around the baby instead.

Matt and I grow impatient and leave the scholars and the little God with his followers to attempt an ascent of the monument.

Matt makes a direct attack on the steep outer wall until Pak Ade calls out and sends us around to the east stairway.

“Slowly, slowly!” he says,”You must be like the Buddha, slow and thoughtful.  At each level you must follow to your left before you go up again.”

And so we climb and climb and wander around the terraces where the life of Buddha is told in finely carved stones. There are elephants and ships, flying clouds and flowing water, wise princes and fighting ogres, trees full of fruit and skies full of angels. We mimic the small seated Buddhas locked in their lattice cones and make a game of hiding in the labyrinth of high passage ways that zig zag around the monument.

As the stones heat up in the day we retreat to mum’s place of refuge for drink and food and then return to take on another level. So it is late afternoon before we finally reach the top of the temple to look out on the twin volcanoes of Gunung Sondoro and Gunung Sumboro which cradle Borobudur and see the face of the sculptor that lies in the silhouette of the mountains.

An apsara brings water at the enlightenment of The Buddha on one of the stone friezes of Borobudur. An apsara female spirit of the clouds and water. (C) Chas Spain 2017          watercolour and ink on paper

Too soon we see the sun dip behind the mountain and hear the hum of the bus and Dad’s call for us to come down off the temple so we know that real time must start again.

Our bodies suddenly feel the exhaustion of the day and we slump thankfully into the seats of the bus with Pak Ade at the wheel rocking us along the road into another dream. We remember little more until we wake up in Yogyakarta the next morning, ready for whatever day five will bring.